How did they get to seven weeks old so quick? 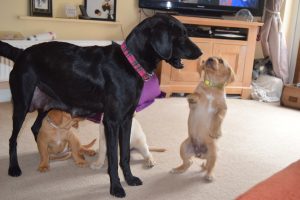 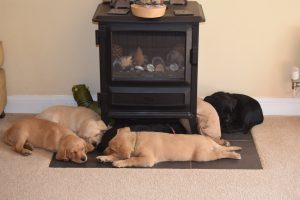 It has been a crazy few days – as always Marchstone House is working at full speed ahead.

We have had a few incidents (not puppy related) resulting on Monday, in spending the entire night at A&E (everything is fine now), then on the Tuesday we were given a baby bird to rear (as the finder didn’t know what to do with it, but thought we would be able to help… which of course I am more than happy to do so).  It took us a while to work out what kind of baby bird it was, to discover he is indeed a squab.  A baby pigeon at approximately 21 days old ish!  So I have had a crash course in how to feed a baby pigeon!  I discovered what food I can give him in an emergency (oats with water, milled linseed), whilst ordering some food on the internet for him.  His special food arrived today and he is loving it.  We have called him (Feisty) Frank.  Of course people think Im nuts for saving a mere pigeon.  My thoughts are that ALL living things deserve the chance to life.  Now if this means I rear him, wean him, set him free and then he gets eaten by a cat then the point would be, he had a chance.  Everything deserves a chance of life.  (however long or short their life is).

Wednesday – saw the puppies turning 7 weeks old!  It was also worming day!  They had a fun filled day of me weighing them (twice… as they don’t sit still long enough for the scales to settle!) then getting covered in the pink wormer syrup!

In the evening…we then had to deal with Huey who had got into another horses field.  Naughty pony!

I have now taken all the puppies around the block and need to get them taken around again!

The puppies gears have gone up again …. we are almost at level CRAZY… but not quite.  My walk has now had to evolve into an elongated large step and gentle slide before placing my foot on to the floor with the “ability” to take the weight off that foot at a moments notice!

Roll on to today.. this morning…. we had puppies that believed they were monkeys.  Our morning routine is to put the pups into the pen (in the garden).  As I was placing them into the pen and Dave was taking the dogs out on to the back path… (so the back gate was open), it was noted that Miss Yellow was climbing to the top of the pen at an alarming rate!  Quickly sorting out the safety of the garden, I sorted out the monkeys, let them out into the rest of the garden, turned around to see Mr Red jumping BACK into the pen.  So the garden pen has now been removed and the morning routine has been changed to accommodate the lack of pen.

The puppies photo gallery has been updated.

Here are some videos from the last couple of days.

Is it dinner time yet?

Puppy romps in the garden

Puppies in the garden

Round and round the garden

See how they run