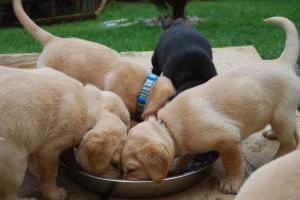 A Guide to Weaning Puppies

The definition of weaning – is to wean the young from the mother, from the mothers milk. Referring to the stage when puppies are introduced gradually to puppy food other than mothers’ milk or milk formula.

A puppy should be on 100% mothers milk (if orphaned then milk substitute) until the age of three weeks. From the age of three weeks the weaning process begins by giving some soaked puppy food.  Weaning puppies will result in gradually reducing Mum’s milk (naturally) and increasing the solid food over a period of time.

The food should be soaked in a formula milk as part of the introductory phase. Puppy porridge (as it is often referred) is offered to the puppy so it can be lapped from a saucer. Over a period of time as the puppy gets used to the food, the liquid content is reduced so the food becomes more solid.  This is so the puppy learns to be able to chew up the biscuit.

The dam is capable of supplying milk to her offspring for several months (unless complications arise such as eclampsia). The signal for the mammary glands to continue to producing milk is nursing or manipulation of the glands.

Weaning is started in preparation for the pup to be ready for its new home at the age of 8 weeks. At this time the pups need to have their gastrointestinal tract accustomed to eating commercially prepared puppy foods which are nutritionally balanced. In most kennels, puppies get the first taste of food other than Mum’s milk at about 3 weeks of age.

Prepare the puppy porridge by placing 2 cups of high quality dry puppy food, which has been soaked overnight using a milk replacer, in a blender. (I use cups which take approx. 100g of dry food).  Adding some hot water (not boiling) so the puppies are served warm porridge. Blend until the consistency of human baby food – no lumps! (This feeds 6-8 puppies of a medium-sized breed. Per meal) Placing the porridge on a saucer the puppies will be able to lap. Be warned it is a messy process but an enjoyable one seeing them getting used to solid food. The sensation of lapping is so different than the suckling the puppy is familiar to.You will in the beginning need to hold the puppy with the saucer to encourage the pup to lap.  The puppies should be having evenly spaced out meals of between 3 and 4 per day by the third day of commencing the introduction of food. Building up to slightly larger meals as the days/weeks go by.   They should be on four meals a day until the age of 12 weeks.  The goal is to reduce the liquid content so as to feed dry food to the puppies by the time they are between 6 and 7 weeks of age. Each week increase the amount of food, decrease the amount of the milk replacer and water that is added.

Once they are on dry food, it may be left in with the puppies (when the dam is out of the box). Leaving water available for the puppies. As the puppies progress with eating more solid food, the bitch may choose to be away from the puppies for an even longer period of time as she will know the demands on her have been reduced. A bitch will on average give her puppies milk up to the age of five or six weeks. The minimum any breeder should hope for from the Dam is for her to feed milk until 3 weeks of age which does ensure nutritional needs are fulfilled. By the time they are 6 weeks, they should be fully weaned from the dam’s milk, eating dry food, and drinking water. If a bitch has weaned her puppies off milk before the age of 6 weeks then a breeder will continue with the milk substitute until the age of 6 weeks. The aim is to wean entirely onto puppy food which is nutritionally balanced for the puppies growing needs.  All bitches are different as to when they stop feeding their pups, some are happy to continue until 7 weeks whereas some stop at 4 weeks.

Providing a programme is followed, in building up the quantity of food eaten by the puppies is done slowly then the bitches ability to produce milk to demand will reduce appropriately. As the puppies begin eating the puppy porridge from about 3 weeks of age, the level of solid food the pups are eating indicates a decrease in nutritional demands on the bitch then it can be considered to start changing the bitch’s diet back to adult food. This can help her decrease milk production. Start by replacing 1/4 of her puppy food with adult food. Keep increasing the adult food and decreasing the puppy food until she is eating only adult food. During the last week of weaning, the dam’s food consumption should be less than 50% above her usual maintenance needs. Feeding puppies is a high demand nutritionally for the bitch so you will need to keep her quantities higher until she has reached her usual fitness level.

A rapid increase in the puppies weight can place undue stress on the juvenile skeleton, particularly in the fast growing breeds which are predisposed to disorders characterised by abnormalities of bone growth. Some of these include Osteochondrosis, hip dysplasia, wobbler syndrome and panosteitis. In some cases excessive dietary calcium intake may play a major contributory role. It is therefore unwise to overfeed growing dogs in an attempt to obtain the maximum possible rate of growth.

Over supplementation with fat soluble vitamins A and D may also result in skeletal and other abnormalities. Contrary to popular belief, milk is not essential in the weaned puppy. After weaning the ability to digest lactose becomes progressively less efficient, feeding milk is likely to result in diarrhoea.