Yesterday we had the Marchstone Labrador Reunion, it was a lot of fun inspire of the weather forecast predicting horrendous conditions – with wind up to 60mph.

I had cancelled the reunion based on the forecast but some people still expressed interest of going – so we went along and was rather pleasantly surprised to see six dogs waiting for us (yes, I was late – nothing new there).

So we had present from the class of 2013 – Maggie, Scrumpy, Milo and Maverick.

From the class of 2015 – we had Luna and Harvey with Honorary Labrador Cola.

In addition to our dogs Charlie, Molly, Archie, Stanley and Melvin.

(Stanley and Melvin being half brothers to the class of 2013 and Uncles to Class of 2015.)

I will be uploading a photo gallery soon. – it was lovely to see the dogs in action.

For the puppies it has been a busy time with visitors giving them plenty of cuddles.

We have made a start on the toilet training, the good news is that the pups are becoming more settled in the garden so they will hopefully get the hang of what they need to do quite quickly.

We have also made good progress with the weaning whereby they are now on three meals a day.

We have made the puppy “pot” bigger so they now have double the space to stretch their legs in.  We have also introduced more toys for them to play.

Since having so many visitors on yesterday they decided they would save their little party trick for us (sorry guys!) but they suddenly started to skip around the pen in a really sweet way – they have gone up a gear (again!).  The developmental phases do seem to come in leaps and bounds.  You blink and all of a sudden they have passed another stage! 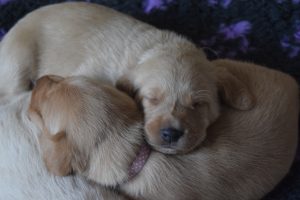 I have updated the puppy gallery!