Today was spent walking many dogs.  I enjoy the variety of the dogs I walk and usually, still get to enjoy a nice peaceful walk with my gang.  I took my five dogs to Buddle Woods and enjoyed a quiet stroll, that is until I heard a massive shriek from one of my dogs.  Initially not knowing which one it was I quickly established it was Stanley.  Stanley had been investigating the neighbouring field which is owned by a farmer.  As Stanley entered the field he got an electric shock.  I think due to the length of his wail it may have struck him across the length of his back.  Poor Stanley refused to come back to me as he knew he would have to go past the nasty fence again.  Thankfully there were no livestock in the field and even better no farmer to be seen.  After what felt like ages, finally, Stanley found an area where he could leap over the fence without being shocked again.  He was rather subdued after it happened but is totally fine now.  I was begining to wonder how on earth I was going to get him back and had put my other dogs on the lead and was looking for somewhere to tie them up, when Stanley re-appeared.  Phew, my heart was thudding as I thought I was going to hear a *BANG* before I got my Stanley back on the right side of the fence.  Thank goodness for a good outcome.

Archie has been playing tennis with us, he loves retrieving the ball so of course it makes sense to have him play the role of “Ball Dog”.  He is very good at it and knows he must wait when we hit the ball with the tennis racket!  We are enjoying watching him dive in to the bushes to find a ball, his keen nose actively seeking out a ball which “accidentally” finds itself in the undergrowth (clearly we have faulty rackets!!) he whizzes in and out before you can blink to return the ball at our feet.  Atta Boy!

Melvin will be 18 weeks old tomorrow – I honestly dont know where the time flies!  Melvin is now very leggy bless him, when he is playing with the others he will fall over just like Bambi does!  It is that fun time again, so tomorrow we will be giving him his monthly wormer.

Other news…. I have finally decided to get a new car.  I have had my new car for three weeks now and Im still chuffed to bits with it.  My old car – the polo was rather pounded with all the dog walking so was in a bit of a state.  So very sadly Polly the Polo went to the scrappy.  Her upgrade is a (blue) Golf plus and rather fabulous she is too!  I love the fact the back seat can go back and forth to accommodate more dogs for my dog walking business. 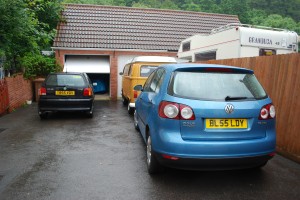 Here is a picture of my new dog mobile.  This was the day before Polly Polo was taken to the scrapheap in the sky.  My Camper van is also a rather good doggy mobile but is used for special dog walking trips!