Today was worming day.  I routinely weigh the puppies up to three weeks for a very specific reason.  They are so active that it is difficult weighing them as they get bigger.  From the age of three weeks I weigh them weekly.

Ordinarily I have my helper with me when it comes to worming day.  I was on my own and I have to say had I of been able to watch the chaos as a spectator it would have been rather funny!

As fast as I put a puppy in the weighing scales another was getting in and the original pup was getting out, another puppy was playing with my clipboard and pen – so I was finding it hard to take down notes.  Finally some sense of order came amid the chaos and I was able to take down their weights (in grams…. I have to do it in grams on worming day for the correct dose…. my usual weights for the puppies is in pounds and ounces!!!).

Then the time came to worm them, resulting in me being stained in pink syrup!  I cleaned the puppies as I put them back into the pen, only to notice that the yellow pups and a black pup were somehow still covered in pink syrup!!!

I cleaned them all up, again, and gave them their lunch with scrambled egg! NOM NOM!

The pups are fine, I don’t like the worming as it can upset their stomachs but so far so good we have had some good poos from three and I am waiting on the other four to see how their tummies are doing!

As a breeder I have always been proud of the puppies doing good poos.  It is worth noting that pups should NOT routinely have soft mr whippy poos!

I have had the puppies playing in the living room – charging up and down, it seems we also have a naughty corner!  As the pups like to congregate on the dog bed, which is a difficult place to take photos of them! (bad lighting!).

I have put some more photos in the gallery. 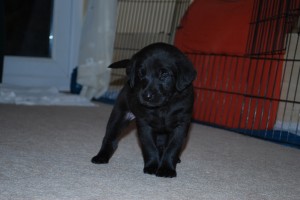