Well the puppies are days away from becoming 6 months of age.  I have been receiving reports from some of my buyers giving me my much needed updates about my extended family!  All the puppies are doing well and are settled into their homes.

I will be posting the photos in the pups gallery shortly.

One of the puppies has come into season at the age of five and a half months.  Which is not unusual but a little early given Molly didnt start her seasons until she was a year old.

6 months is a bit of a milestone for dogs as it seems to be the approximate age when all the training they had been doing so well at seems to go out the window.  My advice to anyone who experiences this with their pup is to remain calm, consistent, patient and start back to basics.  It is a phase they grow out of.  The perfectly behaved dog all of a sudden will forget how to do a sit or wont come back on a recall.  Just go back to your original training method and order will resume with your patience and perserverance.

Melvin is getting rather big now but still prefers to perch on his corner on the sofa.  I dont think he has realised that his legs have grown so long as does seem quite gangly at the moment.

I will be putting Melvin on to two meals at the age of 6 months so hopefully he wont “protest” too much! 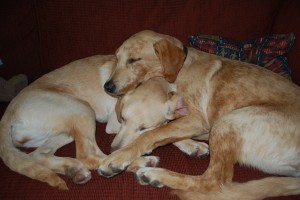 Melvin resting his head on top of Bunty!